In Bangkok, the companies announced the Production of Armoured Vehicles at the Thai Defence & Security Expo 2022 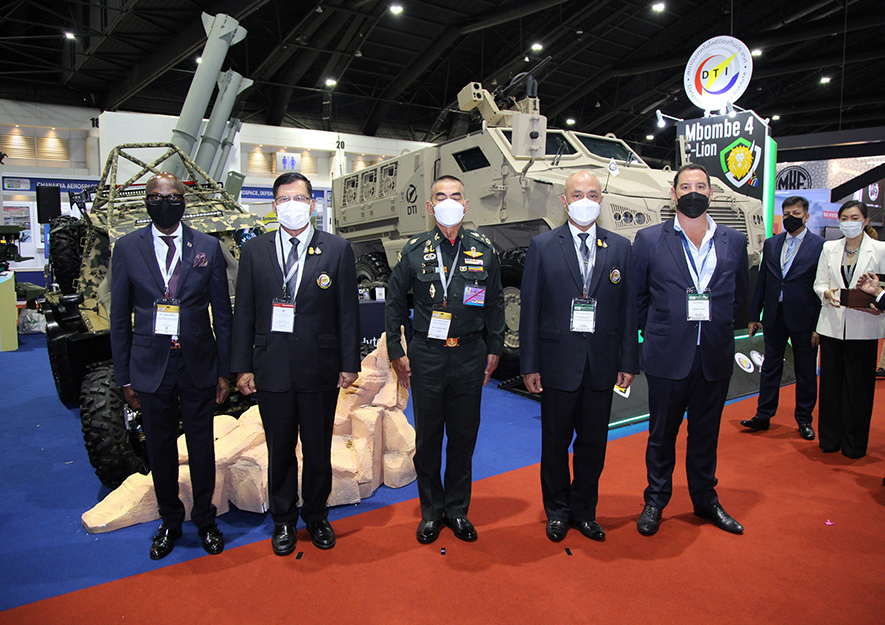 Following assembly of the Mbombe 4 within Thailand, the next generation ICV is to undergo vehicle trials by the Thai Armed Forces and the country’s Defence Technology Institute (DTI), an agency operating under the oversight of the Thai Ministry of Defense.

At a ceremony held at Defence and Security 2022, the locally assembled ‘D-Lion’ (the name of the local variant) was officially handed over to General Chalermphon Srisawasdi, Chief of Defence Forces, Royal Thai Armed Forces by Director-General Choochart Buakhao of DTI, and witnessed by General Porpol Maneerin the Chairman of DTI and Mr. Thabang Makwetla, Deputy Minister of Defence and Military Veterans of South Africa, Mr. Eric Ichikowitz, Senior Vice President of Paramount Group, and Mrs. Ploynapas Chaiyasree, CEO of Jatunapas Company Limited.

Mrs. Ploynapas Chaiyasree, CEO of Jatunapas Company Limited said: “The D-Lion combat vehicle which has been assembled in Thailand through the co-operation of DTI,  Jatunapas and Paramount Group represents a first-of-its-kind in this level of combat capability. South Africa is globally recognized for its leading competence in this vehicle class, whilst Thailand has significant competence in vehicle production.

“This project embodies the policy of the Thai Government to promote local production, at the highest level, with a platform that represents the most technologically advanced combat capability. It will provide the Royal Thai Armed Forces  with the ability to address the ever challenging combat environment. Paramount Group believe in Thailand as an export producer as witnessed today with the hand-over of the first Thai assembled platform.”

Eric Ichikowitz, Senior Vice President of Paramount Group stated that, “Southeast Asia is primed for strong growth in the defence and security industry, however the region has not been immune to the continued constraints on global supply chains among the economic aftershocks of the COVID-19 pandemic. An indigenous defense manufacturing supply chain is uniquely critical to both the ASEAN economy and Thailand’s national security, ensuring readiness in the face of known and unknown threats, while emboldening a sustainable lifecycle of high-skills economic growth in the process.”

“We are privileged to partner with DTI and Jatunapas to bolster local manufacturing capabilities through the production of the formidable Mbombe 4. We are looking forward to building this partnership and that with the Thai government, from this milestone.”

The Mbombe 4’s continued expansion into the Asia-Pacific marketplace and beyond emphasises the success of the Paramount Group-pioneered portable manufacturing model.

“With more than 150 vehicles either being manufactured or on order for delivery or deployment across Africa, Asia and around the world, this announcement in Thailand is an important next step in the Mbombe’s continued expansion, and a testament to the innovative partnerships that we have fostered to the benefit of our partner nations’ respective defence industrial complexes. We are pleased to say that the Mbombe 4 is ready for production in Thailand as of today,” Ichikowitz added.

The Mbombe 4 completes the highly advanced Mbombe family of combat vehicles which have been designed to directly address the increasing demand for outstanding protection yet versatility in conventional and asymmetric warfare, counter terrorism, and peacekeeping missions alike.

Manufactured with a distinct clean-sheet design, while equipped with the latest technologies mission-critical to address the challenges of the modern battlefield, the Mbombe 4 provides high degrees of both ballistic and mine protection (e.g., crew compartment STANAG 4569-Level 3, blast protection STANAG 4569-Level 4a & 4b, protections recognised under a NATO standardisation agreement that institutes world-leading benchmarks for occupant security) alongside independently verified protections against a 50kg TNT side blast or roadside bomb.

The vehicle’s newly tested and certified add-on armour and lightweight shielding system developed by Paramount Group further increases the Mbombe 4’s protection to cover all Level 3 threats within NATO STANAG 4569, in doing so, offering some of the highest levels of protection that can be achieved globally by an armoured vehicle in its class.

Despite such world-class protections, the 16 tonnes Mbombe 4 provides incredible versatility, a burst speed of 140km/hr, the ability able to scale gradients at a 60% incline and a fording depth of up to 900mm, which can be executed without preparation.

The platform notably hosts industry-distinct flat floor mine protections and a rear-door ramp design which ensures the rapid deployment of the crew while the vehicle is either static or on the move.

The Mbombe 4 can also be equipped with various weapon systems and loaded with ammunition, crew, and supplies.